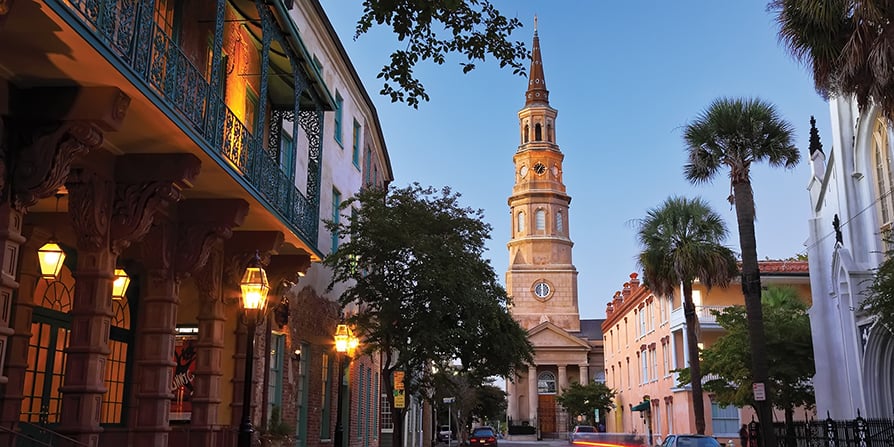 An Overview of the Charleston Area

The Charleston Area is a veritable living museum populated with expertly preserved antebellum mansions; however, it is also a bustling epicenter of culture, invigorating outdoor activity and sumptuous dining that welcomes close to four million visitors annually. Get to know the destination with this timeline.

In 1669, under the leadership of Captain Joseph West, three vessels; the Carolina, the Port Royal and the Albemarle set their sites on the new land, America. A severe storm separated the three ships, wrecked the Port Royal and forced the Carolina to land in Bermuda. In the Spring of 1670, 150 English colonists, indentured servants and slaves sailed into the Charleston harbor.

The first view of what would become the new colony of Carolina came in March 1670 at Bull's Island. The travelers landed on a promising location they christened Albemarle Point in April 1670. The Proprietors soon flattered their king, Charles II, by insisting the settlement be named Charles Town in his honor. Enemies of the colony included the French, the Spanish, hostile Indian tribes and pirates. Disease was also rampant due to poor sanitation and an inhospitable location.

Additional settlers arrived from Barbados in February 1671. By 1672, the expanding settlement recognized the advantages of relocating across the river on the peninsula land called "Oyster Point" because of the mounds of opened and discarded oyster shells left there by the Kiawah Indians. This piece of land soon attracted settlers because of its strategic location between the Cooper and Ashley Rivers. By the late 1670s, Proprietors hoped to avoid the narrow, twisting streets of European cities by using the classical continental street plan. Charles Town became the first American to use city planning where streets were laid out in "broad and....straight lines." By 1680, the rest of the settlement was brought to peninsula Charles Town and the population reached 1,000. To protect the Carolina settlement from attack, a wall constructed out of local materials (mainly brick, palmetto logs and tabby) emerged in the late 1690s. By 1718, the coast had been cleared of most enemies and the wall, no longer needed, was destroyed.

With its many wharves along East Bay Street, Charles Town became a busy seaport. Ships carrying raw materials, deer skins, rice, indigo, and eventually cotton were exported to England and commerce was born. Ships returned heavy with staples and luxuries of Europe which lent a cosmopolitan air to the growing community. Even in its infancy, Charleston had the reputation of being a "Little London" in the semi-tropic wilds of the New World. By 1740, Charles Town was becoming the most critical port in North America for exporting, and an economic boom surged across the colony.

Colonists found out early that the New World had its share of troubles and danger as the coastal town endured a small pox epidemic, a fire which destroyed 1/3 of the colony including 300 houses and a great number of stores in just four hours, a plague among the cattle, and yellow fever and several major hurricanes. Disasters continued to ravage the city with fires in 1740, 1796, 1838 and 1861.

The philosophy of early Charles Town was based on religious tolerance and it was believed that with this attitude the settlement would increase in numbers and profitability. The second charter guaranteed religious freedom. The openness towards religion brought French Huguenots, Baptists (known then as Anabaptists), Congregationalists and Presbyterians. Early in the next century, 12 Scottish families withdrew to form the Scots Kirk, now the First Scots Presbyterian Church. A Jewish congregation formed in 1750, followed shortly by a Lutheran Church and Methodist assembly. The first Roman Catholic mass was held in Charleston in 1786. Because of its origins for religious diversity, Charleston became known as "The Holy City."

The Revolutionary War brought to a close Charleston's Golden Age. In 1776, a British fleet carrying 270 guns failed to take Colonel William Moultrie's palmetto fort on Sullivan's Island. In 1778, the British attacked again, coming by land from Savannah. The city held, but much of the surrounding countryside was torched. The British took control and Charles Town was occupied by England. By 1783, Charles Town had been reborn as Charleston.

In the late 1700s, plantations harvested such crops as indigo (a blue dye) and rice. Long staple cotton was grown on John's Island and James Island. Prosperity from an agrarian society was mixed with great interest in cultural affairs. In 1791, President George Washington toured the States and came to Charleston where he slept in the Heyward Washington House on Church Street and entertained at the Old Exchange Building.

By 1860, Charleston lay divided concerning States Rights. The Ordinance of Secession was signed in December of that year making South Carolina a separate entity from the United States. On April 12, 1861, Confederate troops issued the first shots of the Civil War when they fired upon Fort Sumter, successfully driving out the federal forces. In June 1862, federal troops began their first attempt to capture Charleston when they landed on James Island just southeast of the city. The Battle of Secessionville occurred when over 6,000 massed Union troops launched an assault across a peninsula where 500 Confederate soldiers with cannons waited. Federal troops suffered 700 casualties; Confederates about 200. But Union forces remained determined to seize Charleston. During the summer of 1863 in battles around the city and at Gettysburg, Charlestonians were killed or wounded by the hundreds. The Union bombardment of Charleston was sporadic until January 1864 when some 1,500 shots were fired from Morris Island which caused many fires. (St. Philip's Church was hit repeatedly and its interior damaged extensively.) In early 1865, General William Sherman crossed the Savannah River, but aimed at Columbia not Charleston because he believed the port city had lost its influence and was already, according to him, "a mere desolated wreck...hardly worth the time to starve it out."

Following the Civil War, Charlestonians were too poor to remodel so the city simply adapted her old buildings. Then, in 1886 a major earthquake rocked Charleston damaging more than 2,000 buildings. More than 100 buildings were declared unsafe and pulled down. A total of 110 people died as a result of this natural disaster. Within a year of the 1886 earthquake, proud Charlestonians boasted: "Strangers who visit the city have to hunt up traces of the earthquake, very few of which remain. Charleston has once more risen from her ashes." As a result of the earthquake, iron rods were run through the interiors of buildings and fastened to the exterior walls to protect them from future quakes. Today, these round and star-shaped bolts remain visible on many homes and commercial buildings.

By the early 1900s, Charleston was once again a cultural center. In 1901, the South Carolina Interstate and West Indian Exposition was brought to Charleston. In the 1920s, the Charleston Renaissance was formed with authors Josephine Pinckney, Dubose Heyward and John Bennett expressing their adoration for Charleston. Preservation efforts were firmly in place by the 1940s, allowing Charleston to adapt her old buildings to retain their charm, distinction and tradition.

Then, during the evening of September 21, 1989, Hurricane Hugo with its 135- mph winds headed directly for Charleston. Near midnight, a 12-to-17 foot wall of water swept over Fort Sumter in the harbor and the storm surge came ashore. A week after the storm, preservationists surveyed the city and found that just 25 of the 3,500 historically important buildings had been severely damaged. With now more than 10 years behind it, Charleston has restored itself with all its original charm and character.

With a rich 300 year history, Charleston today is America's most beautifully preserved architectural and historical treasure. The city's past is a testament to the spirit and tenacity of its citizens. Its appeal has been described as a "living museum." As Charleston native Elizabeth O'Neill Verner once said, "It is impossible for me to enter Charleston from any side, whether by land or by sea, and not feel that here the land is precious; here is a place worth keeping..."